When it comes to the crystal or mineral kingdom the variety that has been found in the Earth is mind blowing. I have included just a small range of specimens to show you how wonderful and colourful this kingdom can be.

If you are ordering outside of Australia, please contact us and we will process your order individually. 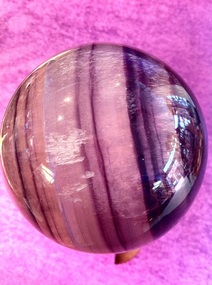 Purple and clear Fluorite Sphere
Fluorite is another mineral that comes in an amazing array of colour. Some are pink, blue, clear, yellow, rainbow (banded with purple, green, clear and blue), purple and green. Its main chemical composition is calcium fluoride, with a hardness of 4, which makes it a fairly soft mineral.  It is predominately found in China, England, Argentina and the USA.
We currently have a large variety of Fluorite in natural raw crystals, octohedrons, poslished pieces, carvings and jewellery.
Colours include purple, pink, yellow, rainbow, clear quartz with fluorite inclusions and calligraphy (shu fa) stone just to name a few. We have natural octohedrons starting from just $2.00 and tumbled stones from $3.00.
This is an excellent stone for someone studying, it aids in concentration and focus. It is also good for cleansing the aura.

This mineral, named for mineralogist and geochemist Kuzma Alekseevich Vlasov, who was the founder of the Institute of Minerology, Moscow, is located in northern Russia, Canada and Portugal. This rare mineral is usually found in irregular shapes of varying, albeit usually small, size.

Famously dubbed 'fool's gold' for its appearance, Pyrite has been known to man since time immemorial, its very name a reference to its ability to strike sparks which may be used to light a fire. For many years, pyrite was primarily sourced from Spain but in years, Russia, China, Peru, Italy and a number of other countries have become major producers of the mineral.

Realgar is an arsenic sulfide mineral, renowned in pure form for it's striking red colour. The mineral has been used throughout history for a variety of purposes including a repellent of snakes, being sprinkled around houses and as a rat poison. The red colouration has lent itself to use as a pigment in the creation of art and as a dye.

Due to the presence of arsenic within the mineral, Realgar is toxic and one should always wash one's hands after handing the mineral.

Realgar specimens are primarily sourced from areas associated with volcanic and geothermal activity. Areas that produce large amounts of the mineral include China, the United States and the Balkans
Realgar on Quartz Specimen 05
A$
125.00