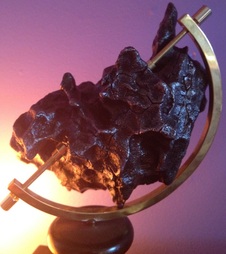 Sikhote-Alin Meteorite
Kat approximately 10:30 am  on February 12th, 1947 witnesses in the Sikhote-Alin mountains in Russia
saw a large bolide, burning very brightly, come out of the northern sky at an angle of approximately 40 degrees.
With a mega bright flash and with deafening sounds, the impact was seen from almost 300 kilometers away.
As the meteorite was travelling at super sonic speeds, approximately 15 km per second, when it started to enter the atmosphere it began to break apart leaving shrapnel in its wake culminating in a violent explosion of the largest core mass. The vapour trail that has been estimated at 35km in length hung in the sky for several hours afterward. (What an impressive sight this must have been!)
This meteorite fall was massive with the overall size estimated to be between 90,000 - 100,00 kg.
The strew field it covered is about 1.4km2. Alot of the fragments made impact craters with the largest being
26 meters across and 6 meters deep.
The Sikhote-Alin meteorite is classified as a nickel-iron octahedrite. It's composition is approximately
93% iron, 5.9% nickel, 0.46% phosphorus, 0.28% sulphur and trace amounts of iridium and germanium.

There are two distinct types of specimen;
Regmaglypted specimens, showing fusion crust and signs of atmospheric ablat
Shrapnel or fragmented specimens, pieces with sharp edges of torn metal with evidence of violent fragmentation.