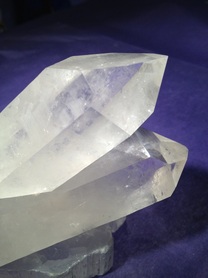 Clear Quartz cluster from Brazil
Clear Quartz or Rock Crystal is made up of silicon dioxide SiO2 and is the second most abundant mineral on Earth after Feldspar. There are many different types of quartz including clear quartz, amethyst, rose quartz, citrine and smoky quartz, just to name a few. All quartz has a hardness of 7 - 7.5.
Silicon is one of the foundations of the silicon chip which is used to store memory and information, it is responsible for the quartz movement in watches. It has piezoelectrical properties when put under mechanical stress, (even if you bang two crystals together really, really hard they may light up for a second).
In previous times they have been used to power crystal radios too.
Flawlessly clear quartz is rare, most clear quartz has internal terminations and often misty whispy inclusions.
In healing, clear quartz is considered one of the master healers as it has enormous capabilities and works with all chakras and areas of the body. It is also an amplifier of energy and that of other crystals around it.
**All prices include GST and Express Postage within Australia.
If you are ordering outside of Australia, please contact us and we will process your order individually.